Claymation is an art style centered on the complex and creative construction of clay characters. Approached through stop-motion (though typical animation has been known to combine with claymation in certain situations), the style is unique and highly charming.

Despite this approach to animation being time-consuming and relatively rare these days thanks to advancements in animation technology, there is no denying some exceptional films are grounded in Claymation.

A new stop-motion movie hit during the holiday season in 2022 from Guillermo Del Toro, and while Pinocchio was not a claymation movie, it reminded a lot of fans of the love and dedication that goes into making those movies. The good news is that there are more claymation movies coming soon. Aardman is bringing back Wallace and Gromit for a new adventure. While long-time Wallace voice actor Peter Sallis passed away recently, his replacement Ben Whitehead will carry on the character for the new movies, which will arrive in 2024. Until that time, there are plenty of great claymation movies for people who love the technique.

The one claymation Aardman Wallace and Gromit movie that hit after the theatrical movie, The Curse of the Were-Rabbit, was called A Matter of Loaf and Death. The movie is also one of the least appreciated of the series, although it is not bad in any manner.

This is a murder mystery that Wallace and Gromit deal with as they start a new bakery business. The problem is that the killer is murdering bakers. Despite not getting the same critical acclaim as others, it was still Oscar-nominated and won a BAFTA and Annie Award for Aardman Studios. Over 14 million people watched it when Aardman released it on Christmas Day on BBC-One television.

While it is not technically claymation, Rankin-Bass had a similar format for their holiday movies. This included Rudolph the Red-Nosed Reindeer. Instead of making the figures out of clay, these are made out of wood and then sent through the same stop-motion techniques as the beloved claymation movies throughout the years.

Instead of claymation, the technique was called “Animagic” and consisted of puppet figures made of wood. This opened the door for the company to make the Christmas movies that fans still love to this day, including Santa Claus Is Comin’ To Town.

The Boxtrolls is one of the few claymation films in recent years not made by the geniuses over at Aardman Studios. Its response wasn’t overwhelming, but the appearances of Ben Kingsley, Richard Ayoade, and Simon Pegg are well-placed.

The unique setting meant the creative use of clay models and animation was perfect for the film. Considering its unusual approach, it even managed to receive its premiere during the 2014 Venice Film Festival.

Strange and unusual is putting it extremely lightly when it comes to The Adventures of Mark Twain. in this film, The titular author is the pilot of a grand, steampunk-esque airship who is joined by Tom Sawyer, Huck Finn, and Becky Thatcher on what appears to be a collision course with Halley’s Comet.

The rest of the plot concerns the kids meeting up with other characters from his works. It’s weird, to be certain, but entirely worth a watch.

The creepy effort from the same studio that brought you The Boxtrolls, ParaNorman was a surprisingly dark effort for a film aimed at children. It took a few creative leaps in its production, combining the stop-motion claymation with 3D-printed faces for each character.

On top of the leaps forward from a production standpoint, ParaNorman was also revolutionary in its characterization. It introduced the first openly gay character in a mainstream animated film in the form of Mitch. Done without fanfare or the intention to draw attention, this reveal is one of the subtle reasons ParaNorman was such a brilliant, forward-thinking release.

This is certainly the least well-known critically acclaimed claymation movie. This tragic, semi-comedic Australian work was low-budget, with a relatively subtle cast and a timid release, but has come to be recognized for its emotionally driven storyline and dark content.

It took a long time to produce, with a multitude of sets, puppets, and props combining to form an artistically immense film brimming with the complex themes of addiction, mental illness, and loneliness. A poignant release that is well worth taking a look into.

Wallace And Gromit: The Curse Of The Were-Rabbit (2005)

The Wallace And Gromit series is full of gems, but their feature film, The Curse Of The Were-Rabbit showed their ability to turn a series built on shorts into a feature that was universally praised for its expansion on an already excellent concept.

Parodying various horror films in its approach, The Curse Of The Were-Rabbit has the classic appeal from the rest of the series through its ability to entertain kids and keep adults engaged with its mature storytelling. It remains one of the best stop-motion movies according to fans of the medium.

While the news of Chicken Run 2 is being slowly swept somewhat back under the rug (even though it is apparently in production), one thing fans can all agree on is that the original Chicken Run is a brilliant piece of cinema.

Thanks to a collaboration between DreamWorks and Aardman, Chicken Run was able to gather an exceptional supporting cast including Mel Gibson and Timothy Spall. On top of this, the brilliant script and story were simultaneously touching, heart-wrenching and hilarious all at once. No wonder it’s the highest-grossing stop-motion film of all time.

Moving back to the Wallace And Gromit series and its 1995 classic A Close Shave, it’s clear that Aardman is the undisputed king of claymation. With the late Peter Sallis on top form as the Wallace (the human) and Gromit (surprisingly not anthropomorphic, as with most animation) as on point as ever with his silent visual jokes, this half an hour special has held its place as one of the best short films of all time since it first hit screens.

It also introduced Justin Fletcher as Shaun the Sheep. Shaun went on to have a successful franchise of his own, with Fletcher having voiced the iconic animal for 24 years.

This short film was how Tim Burton got his start with Walt Disney animation before he was then let go because it was too dark. Vincent is an Edgar-Allan-Poe-inspired look into the imagination of a young boy with a taste for the mysterious and macabre, much like the director himself.

While not exactly what one would call nightmare fuel, it does showcase a darker side of Disney that not many people see nowadays. Plus, it features Burton’s iconic style with narration by Vincent Price.

Any Disney buff who knows about Burton’s history with the company knows that the studio let him go for being too dark with the original Frankenweenie. So how ironic is it that Disney would later ask the director to do a full-length motion picture based on the “scandalous” short film?

Frankenweenie isn’t just a stop-motion adaptation of one of Burton’s early short films, but a love letter to the Golden Age of horror movies. It’s Burton doing what he does best.

Tim Burton seems to have a loving knack for stop-motion films, but when that medium is paired with a ghoulishly delightful musical, stand back! Corpse Bride has all the makings of a gothic Broadway musical with Burton’s special flavor of weirdness.

With wide-eyed characters, a fiendishly fun color palette, music by Danny Elfman, and vocal performances by both Johnny Depp and Helena Bonham Carter, it’s everything one could expect from the director’s palette. It ranks among the best stop-motion horror movies.

The Nightmare Before Christmas (1993)

It’s pretty rare to see something built on such creepy characters use such a charming art style, but when our screens slowly become filled with the contorted, slippery movements of the main characters, we can understand why this unique approach was taken.

The Pirates! In An Adventure With Scientists (2012)

Despite its long, unappealing title, it’s no secret that The Pirates! In An Adventure With Scientists was a star-studded hit for the world of claymation. Fronted by an incredible British cast of Hugh Grant, David Tennant, Imelda Staunton, and Martin Freeman, the film was well-received, even if the box office results weren’t explosive.

This one comes from the minds over at Aardman Studios and was their first stop-motion picture since The Curse Of The Were-Rabbit. It was also their first film to drop in 3D. While the Wallace And Gromit series always looks great, this film really pushed the limits of claymation.

Spinning off from his conception way back in A Close Shave, Shaun The Sheep set off on his own world-beating quest. He had his own (very well-received) TV show aimed at children, a spin-off called Timmy Time based on a character from the show (aimed at even younger kids), and finally, a feature film.

Despite being largely silent, it was an instant hit for adults and kids alike. An impressive feat, considering it left much of the humor to come from visual aids rather than lines. It even spawned a 2019 sequel which received an equally positive reception. 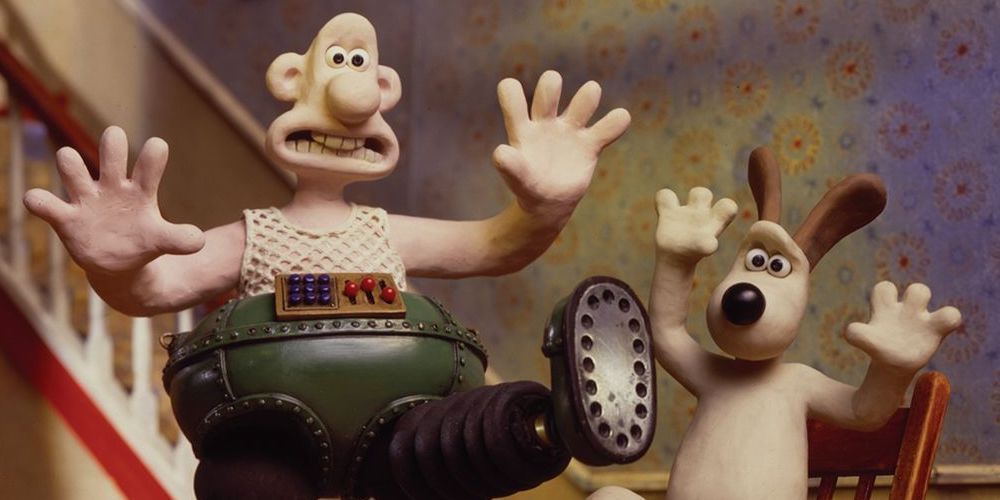 The greatest piece of claymation in history returns to Wallace And Gromit one final time. Given the mature and confident production of this short film, fans would be forgiven for not realizing this is just the second entry into the Wallace And Gromit series.

The titular duo is put up against an evil penguin who turns one of Wallace’s inventions, the Techno Trousers, against him. In a genuinely clever plot, the penguin (Feathers McGraw) forces Wallace into a diamond heist, before Wallace and Gromit use their inventing powers and teamwork to finally imprison the mischievous McGraw.

Based on the novel by the legendary Neil Gaiman and brought to life by the director of The Nightmare Before Christmas, Henry Selick, comes this terrifying twisted fairytale. Coraline is not only one of the most visually impressive films from Laika studios, but one of the most unsettling and beautiful animated films out there, a stop-motion movie that scarred childhoods.

Whether they are fans of the book or just animation junkies that enjoy a healthy dose of freaky in their films, this delightful dive into an alternate universe is one that fans of animation won’t soon forget.