Dragon Ball Z: Kakarot will be making a return soon thanks to a free next-gen update shortly followed by a new season pass for the game that will begin with a DLC focusing on Bardock, the Father of Goku. Many fans are hoping that they may get to see even the Tournament of Power from Dragon Ball Super make an appearance as a DLC in the future.

There were many epic and iconic scenes when it came to the Tournament of Power like Goku unlocking Ultra Instinct and using his Sliding Kamehameha against Kefla. The Kamehameha has been used in some unique and surprising ways throughout the years like this that always manages to drop fans’ jaws in shock and awe. 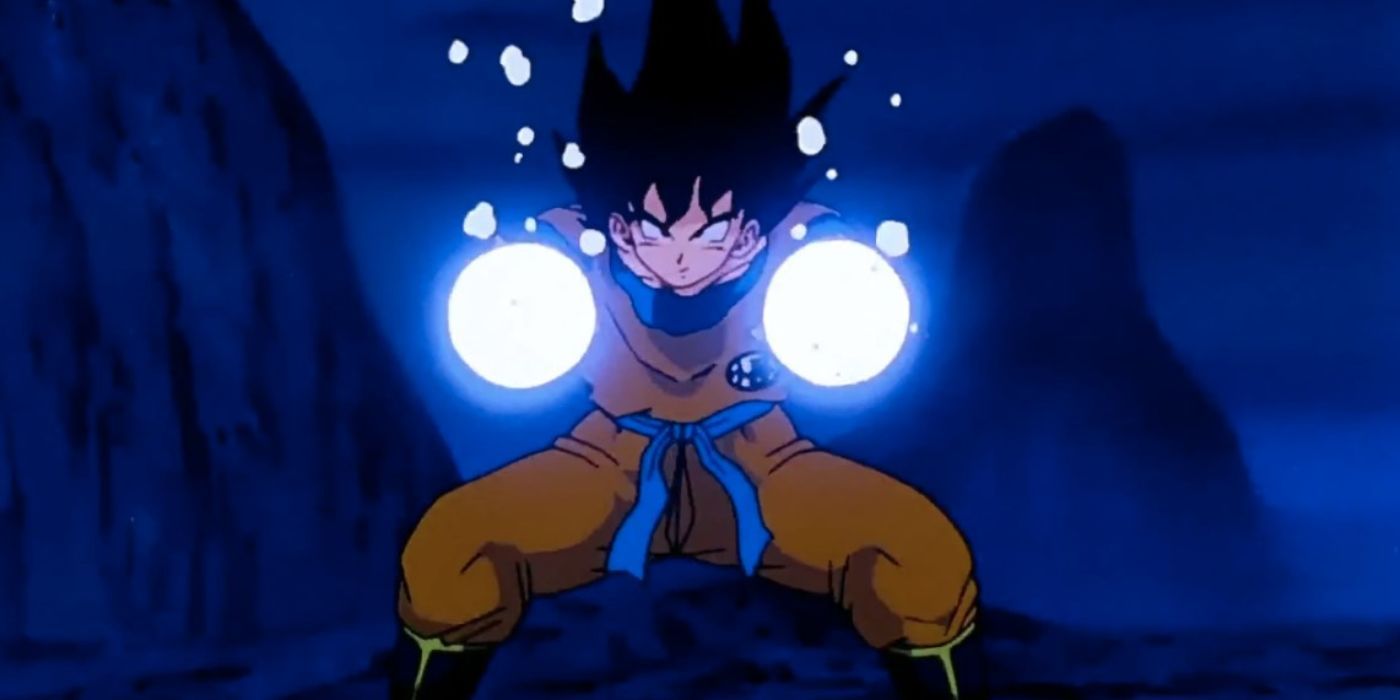 Goku usually summons the Kamehameha from both of his palms at once, however, he surprised fans in his fight against Frieza when he used the wave from both hands at once and as balls of energy rather than a massive wave.

Due to Frieza unable to sense ki, Goku used the two Kamehameha orbs as a distraction, rather than an actual attack. This brilliant strategy managed to fool Frieza as he locked onto where these attacks were coming from and give Goku the opening he needed to strike him from behind.

9/10 Friends Or Family Team-Up With The Multiple Kamehameha

The Kamehameha wasn’t originally intended to be fired alongside other waves to create an even stronger attack. However, this is something that’s seen in multiple instances in the franchise where other wielders of the technique combine their might to overthrow their opponent.

The most notable usage of this is the Family Kamehameha from one of the best Dragon Ball films, Broly – Second Coming. This attack saw Goku, Gohan, and Goten all together, firing a massive Kamehameha wave against Broly to overwhelm and kill him once and for all. A very non-traditional way of utilizing the attack to defeat a villain.

8/10 Trunks Utilizes His Own Version With The Flame Kamehameha

The Flame Kamehameha is a video game-exclusive technique that both Future Trunks and Trunks use in Legacy of Goku 2 and Buu’s Fury respectively. This technique seems to be derived from attacks Trunks has had in the franchise like Burning Attack and Burning Storm by keeping with a fire theme.

While this attack is fired no differently than a Kamehameha, its intent is far different as Trunks can move the attack while it’s continually firing. This is a great way to keep any enemies from trying to run away. Even though this technique is a video game exclusive it’s so unique that it deserves to appear in the animation.

Fans had known about the Final Kamehameha for a long time thanks to the video games giving Vegito the technique. However, it wasn’t until Dragon Ball Super that they finally got to see it in animation, and it was well worth the wait. This technique combines Goku’s signature technique, the Kamehameha, alongside one of Vegeta’s strongest attacks, the Final Flash.

This attack drills into the opponent with a brutal new sort of explosive damage that the other two attacks were never capable of on their own. Goku and Vegeta have even used this technique outside their fusion by combining their attacks like when they fought against the Trio of Danger in the Tournament of Power giving fans one of the best energy clashes in Dragon Ball.

Vegito’s signature technique may be the Final Kamehameha, however, Gogeta’s is the Big Bang Kamehameha. In much the same way, this technique combines the techniques of Goku and Vegeta. Goku’s Kamehameha alongside Vegeta’s Big Bang Attack. This technique is most commonly seen in Dragon Ball GT as Super Saiyan 4 Gogeta creates a horrifying massive attack that nearly killed Omega Shenron.

While the form is a mixture of the Kamehameha, it almost doesn’t seem like one. Gogeta forms a massive ball of energy and rather than firing the ball back a surge of energy flies from it that consumes the opponent. The attack has a sense of impending doom that initially tricks the opponent before delivering the actual blow.

The Reverse Kamehameha employs the wave as a boost in speed, rather than as an actual attack. This could be to stop a fighter from flying in one direction after getting hit, or it could be to fire the technique in the opposite direction to send them sailing toward their opponent.

Goku uses this in a few notable ways. One is when he fires his Kamehameha in the opposite direction to slam into Tien’s chest and knock him unconscious. Another time, which is easily the most iconic, is when Goku fires a Kamehameha into the Earth to burst him into the air to deliver his final punch against King Piccolo.

One of Goku’s best fights in Dragon Ball was no doubt against Piccolo in the 23rd World Martial Arts Tournament. What Goku did in this fight is something some fans probably never expected and that was using his feet to perform a Kamehameha.

Much in the way that Goku used the Reverse Kamehameha to burst himself in the air toward an opponent, Goku uses his feet to do the same. However, this is far more efficient as it allows Goku’s hands completely available for combat as he boosts up into the air and attacks his opponent as he does against Piccolo.

3/10 Goku Uses The Bending Kamehameha To Land A Hit

One of Goku’s smartest alterations of the Kamehameha was when he created the bending Kamehameha that he first uses against King Piccolo and later notably uses against Raditz in Dragon Ball Z.

With this technique, Goku fires his Kamehameha as usual, he then alters and bends the wave around his opponent to land a direct hit at them from behind. The Kamehameha wave has often been blocked and evaded by many foes, so to create a new way to use the Kamehameha to surprise the opponent was brilliant.

2/10 Goku Used The Sliding Kamehameha To Surprise His Foe

In what was no doubt one of the most shocking scenes in Dragon Ball Super was Goku sliding atop Kefla’s attack with his Kamehameha then smashing it into her and sending her out of bounds. The build-up was incredible, and many fans were at the edge of their seats as they watched Goku charging up his Kamehameha against Kefla.

This was a brilliant way to surprise fans and to get them cheering on the screen rather than having Goku perform one of his best techniques in Dragon Ball the same way as usual. It was also the perfect type of maneuver to show how unique Ultra Instinct is with its highly evasive movements. Usually, Goku stands still to charge his technique as it takes a lot of energy to concentrate. Ultra Instinct provided Goku with everything he needed to use the Kamehameha in a way he never had before.

While the Sliding Kamehameha was a truly epic performance, the Instant Kamehameha is even better. This attack has the same kind of incredible build-up with a shocking conclusion. Everyone second-guessed Goku as he charged his Kamehameha above the Earth, making them think he was going to destroy the planet alongside Cell.

He landed the technique point-blank on Cell after he teleported in front of him, exploding the top half of his body. Not only did this display Goku’s incredible raw power, but it also showed just how powerful Cell was and how much he could take. The Kamehameha is riddled with flaws like having to remain in one place to charge the attack and then having to worry about even landing the blow. So Goku being able to teleport to use the technique was both ingenious and an incredible will of concentration.