Irish actor Brendan Gleeson is back in action this year with Martin McDonagh’s tragicomedy The Banshees Of Inisherin, which released just a few weeks back. While the veteran has been a mainstay in several critically films from his native Ireland and Hollywood, Potterverse fans would always remember him as the Hogwarts professor and Order of the Phoenix member Alastor “Mad Eye” Moody.

The role introduced Gleeson to more global and mainstream audiences with his character still beloved among Potterheads, as is evident from the several memes on him still doing the rounds on social media. While most of the memes focus on the character’s eccentric personality traits, some even tend to highlight how Barty Crouch Jr impersonated him in the events of The Goblet Of Fire.

Can The Real Moody Please Stand Up?

Even though Voldemort is properly introduced during Harry’s fourth year at Hogwarts, Barty Crouch Jr turns out to be the ultimate antagonist in the end who not only kidnaps Moody but even impersonates him to kidnap Harry for the “Dark Lord”.

The plot twist made for quite a thrilling ending, but it goes on to show how smartly Barty managed to outwit everyone at school. Fred and George Weasley might be the greatest pranksters in the history of Hogwarts but not even their smart minds would match the evil nature of Barty who managed to retain his disguise for one whole year! 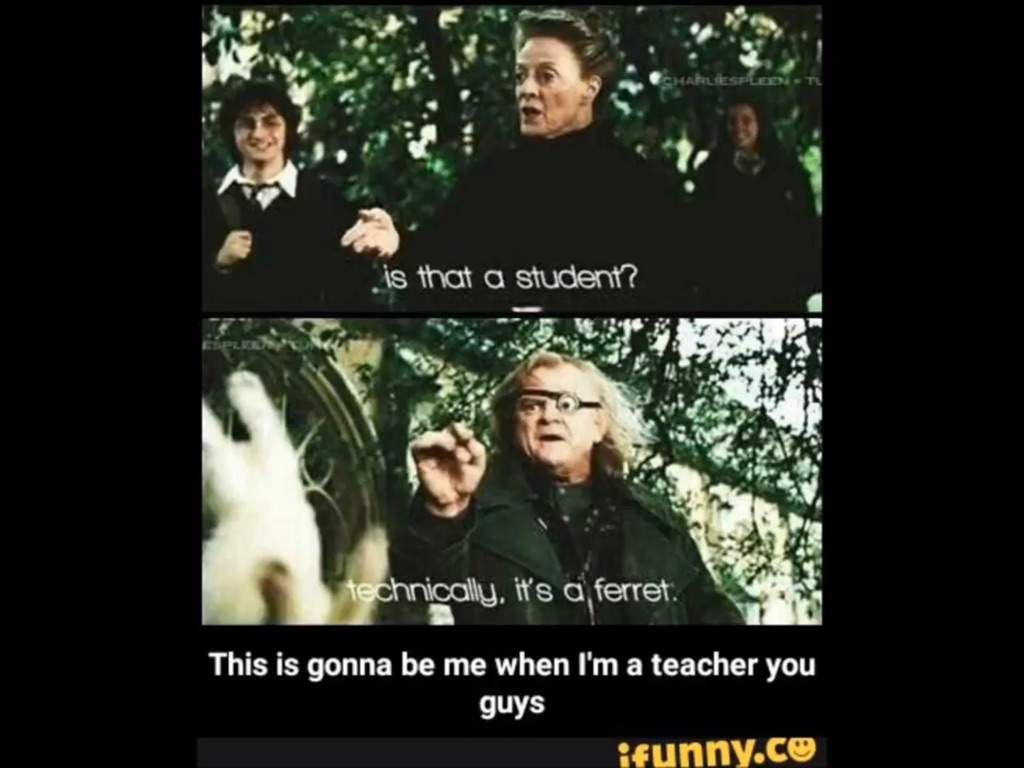 Draco Malfoy is one of the most interesting Hogwarts students in the Harry Potter universe. Some have despised him right from the start while others empathize for him eventually. However, some of his bratty actions are inexcusable, and it would anger fans even more when Slytherin teachers like Severus Snape display their bias towards him.

While it is unclear whether Moody sided with Gryffindor or not, he did not have any tolerance for oversmart and brash students like Malfoy, even turning him into a ferret in The Goblet of Fire. Even though it was still Barty in disguise, Professor McGonagall was hardly surprised by this act of transfiguration implying that this is a very characteristic thing for Moody to do to his students. As this meme suggests, Moody’s teaching methods might be unconventional but maybe some students deserve it!

Axl Rose, the foul-mouthed, rebellious frontman of hard rock outfit Guns N’ Roses was a huge star back in the 80s and 90s. Since then, his stardom has somewhat dwindled even though his music continues to be as popular as ever. While Rose’s touring has lessened, maybe he can pick up side gigs as auditioning for Mad Eye Moody in any future Harry Potter projects.

The wavy blonde hair and the face structure are pretty similar to Brendan Gleeson’s take on the character. Imagin Rose performing “Welcome to the Jungle” or “Paradise City” in the Mad Eye Moody get-up now!

Just Another Day In A Moody Classroom 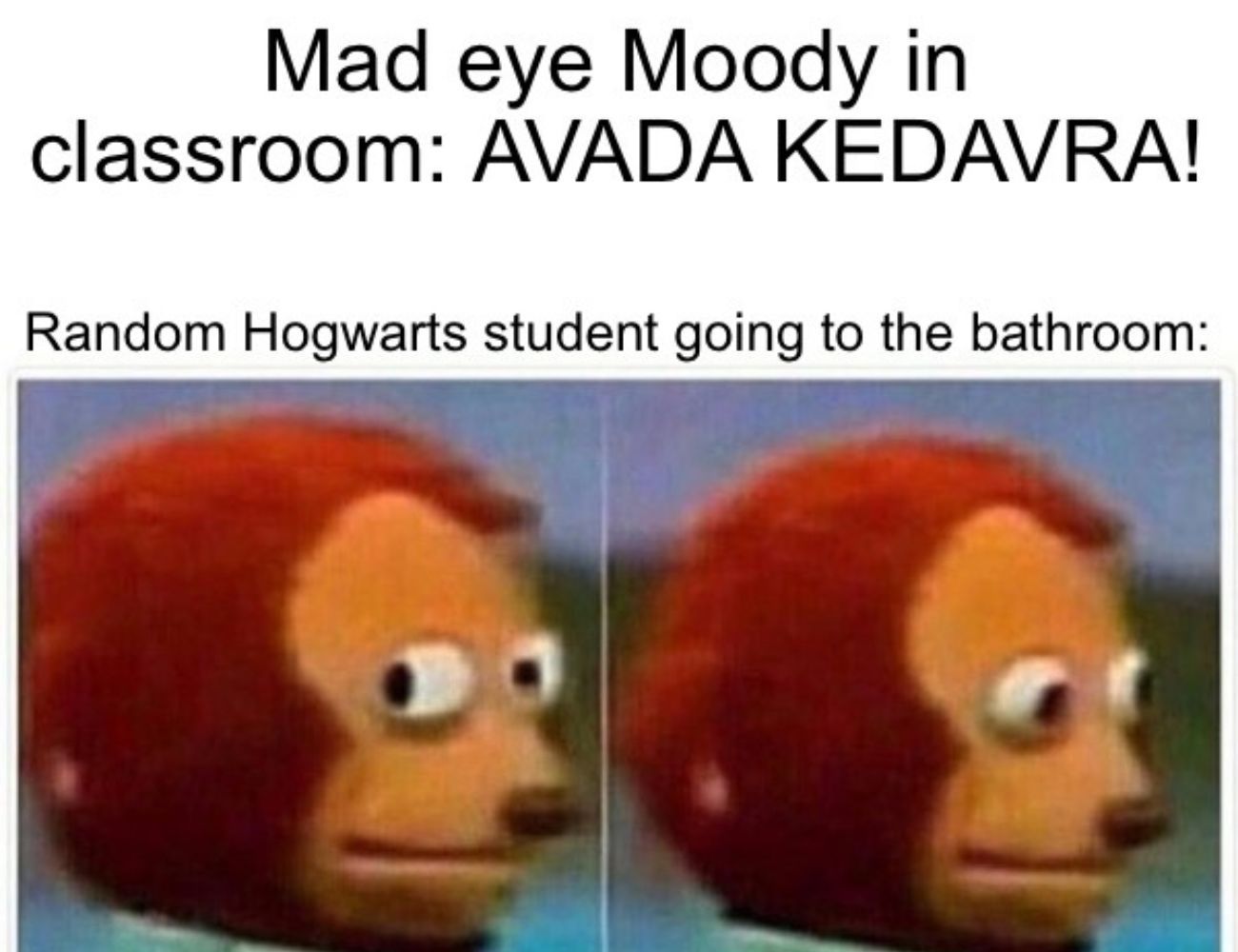 Moody’s knowledge of the Dark Arts and mastery over the Unforgivable Curses is immense, even testing the Imperius curse in his classroom which gives the caster the ability to gain total control over the victim. It wouldn’t have been surprising if Moody’s Defence Against the Dark Arts period would also be characterized by lethal spells like Crucio or the Killing Curse Avada Kedavra.

Given the unpredictability of his teaching and the lethal curses that he can teach, it is better to not bother him during class at all, even if the student just wants to go to the bathroom!

A valiant Auror who put several miscreants behind bars at Azkaban, Mad Eye Moody might come off as very paranoid or intimidating. However, given the number of enemies he has made in his life, even he is bound to have moments of fear and caution.

When the real Moody is finally discovered in a trunk at the end of The Goblet Of Fire, one can’t help but feel pity for him as he is cramped inside much like Oh Il-Nam in this scene from Squid Game that turned into a popular meme template later on. 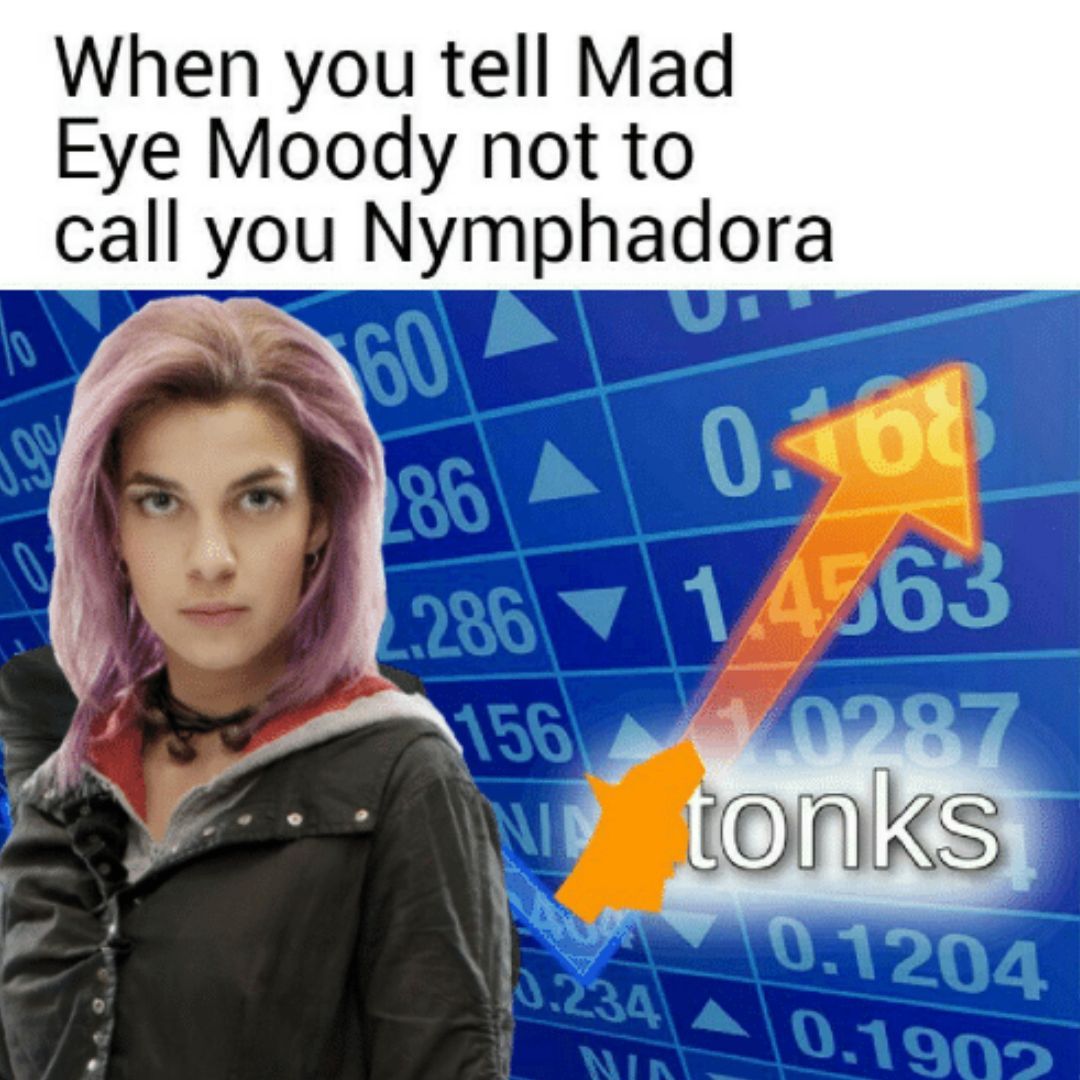 Nymphadora Tonks might have a limited role in the movies, but she does set herself apart with her skills as an Auror, a direct result of personal training under Moody. Despite their respect for each other’s magic, they do have their subtle “moody” moments too. A major case in point is when the Order of the Phoenix shows up at Harry’s doorstep to rescue him.

While discussing further plans, Moody shushes her by her first name which prompts the witch to say, “Don’t call me Nymphadora!”. Apart from showing how Moody can annoy her at times, it is also one of those memes that sum up Tonks as a character with a familiar play on the “Stonks” meme template. 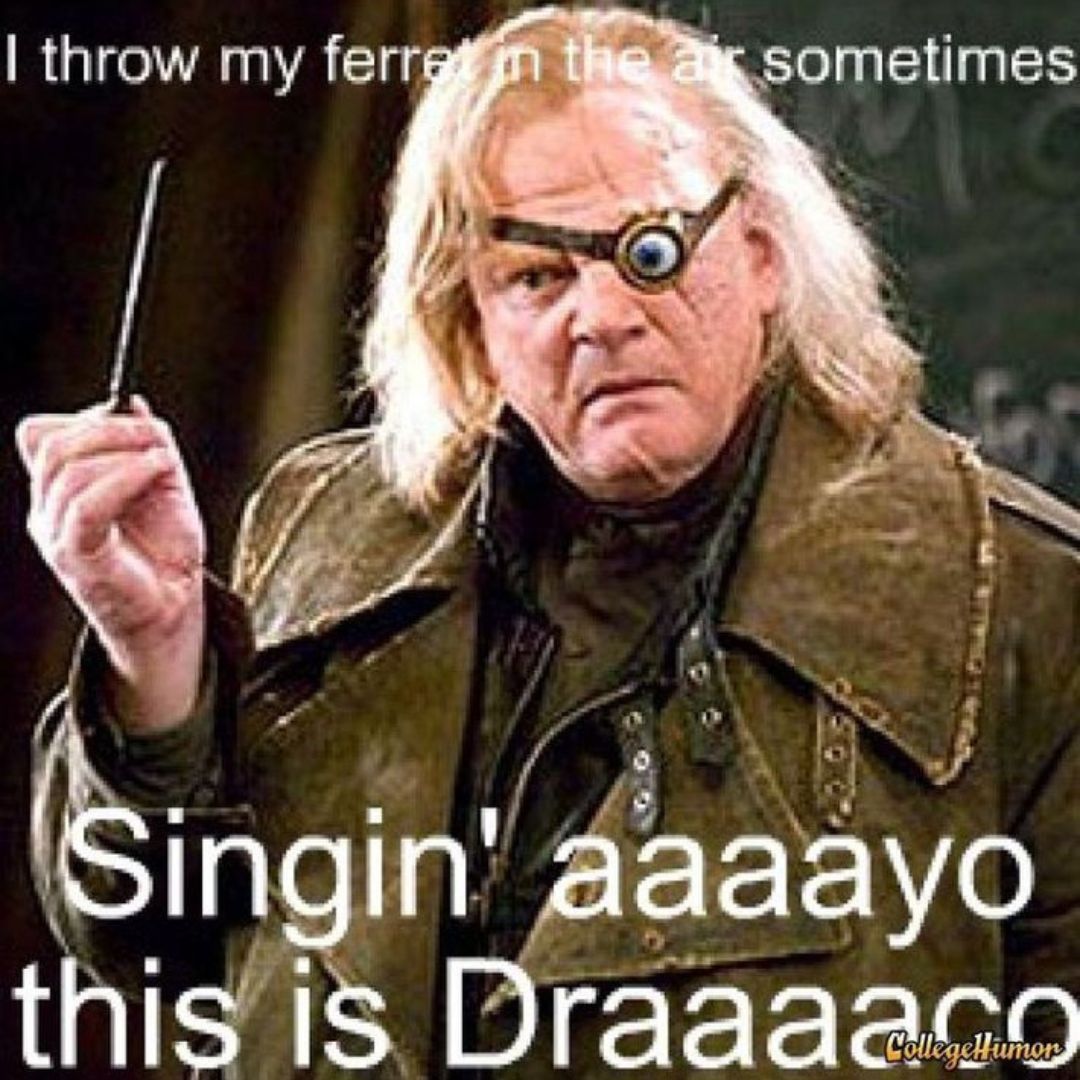 A clear parody of Taio Cruz’s trademark hit “Dynamite”, this meme yet again pulls Draco Malfoy’s leg who would constantly share bad blood with Moody after changing into a ferret in that one memorable Defence Against Dark Arts class. Clearly not the one to tolerate any jest against him, it was qite an embarassing experience for the Slytherin student.

As for Moody (or Barty Crouch Jr in this case), it makes for a musical moment in this meme. Given that Taio Cruz’s music dominated the early 2010s and the Harry Potter films concluded in 2011, the meme’s references would only end up making a few Gen-Z-ers quite nostalgic.

Not That Mad Anymore 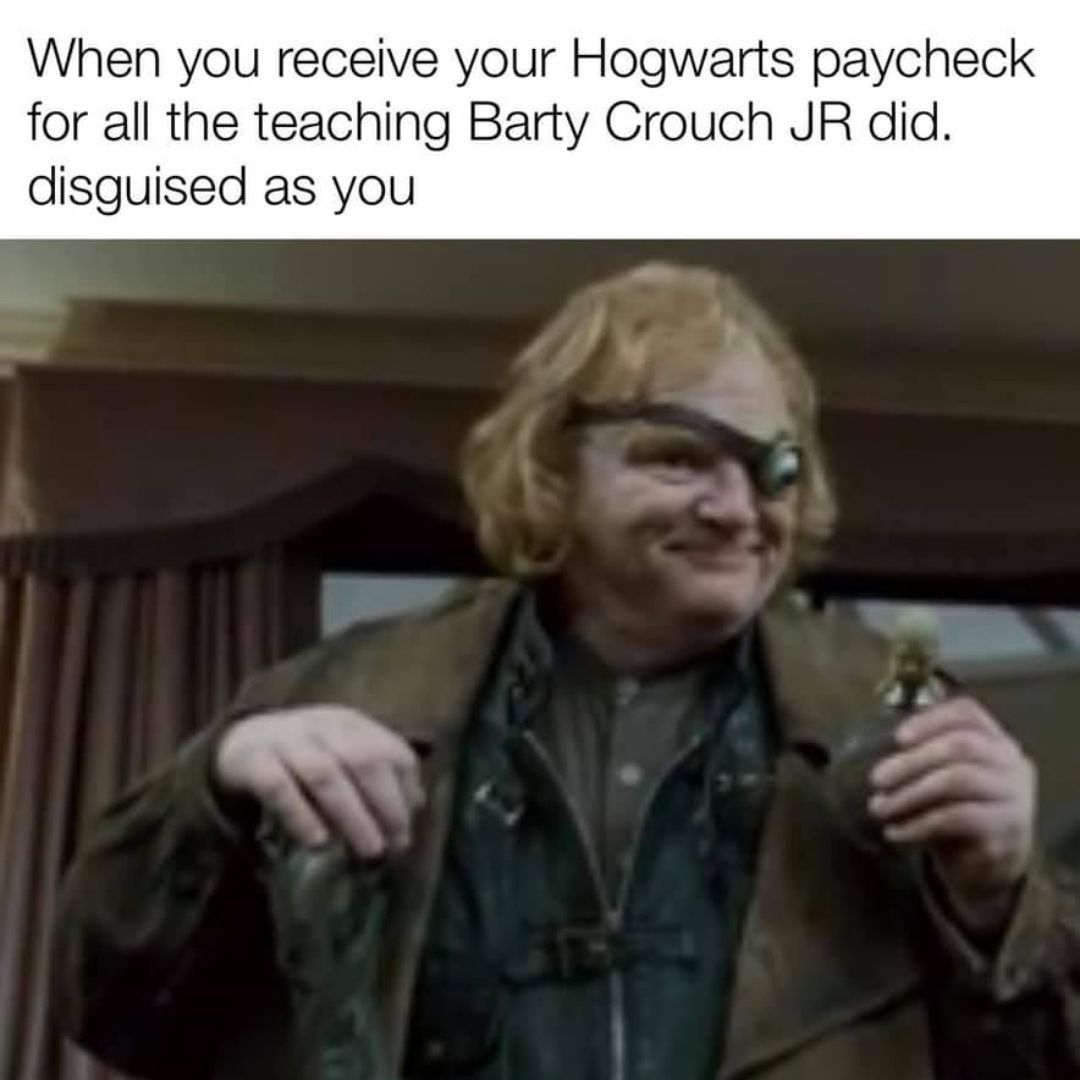 For the entire year that Barty Crouch Jr was teaching at Hogwarts, the entire teaching faculty was clearly duped. And with Moody being discovered towards the end, Dumbledore and his staff would surely sympathize for him, paying him the stipulated salary that might have otherwise been paid to Barty.

So, yes, thankfully, the Auror gets enough monetary benefits for all the trouble that he endured. This meme is also notable for showing Moody as a smiling man, a rare sight as most of his stills feature him with a grumpy expression. As shown in both the books and films, Moody can, in fact, be quite a caring and warm-hearted individual instead of just being the delusional and paranoid wizard that he is otherwise assumed to be.

For all the wisdom Hogwarts headmaster Albus Dumbledore seems to evoke, he can be outsmarted too as is evident from Barty Crouch Jr’s elaborate plan. But in Dumbledore’s defense, he did finally deduce the mystery when Crouch (as Moody) began to lose his composure.

That troubled year at Hogwarts aside, Dumbledore and Moody have been quite close as friends even fighting in several battles together. In fact, it was Dumbledore who asked Moody to join Hogwarts as a Defence Against Dark Arts teacher in the first place, back in 1993.

The Lord Of The Rings movies and the Harry Potter series have both marked watershed moments in the evolution of the fantasy genre in 21st century cinema. So, it only makes sense for both universes to collide every once in a while through memes.

On a Reddit trend celebrating the Peter Jackson-directed film series, several Redditors began creating all sorts of memes using Lord of the Rings quotes as prompts. In this case, Moody’s proficiency in the subject of Transfiguration are joked at. Samwise Gamgee’s fear of Gandalf turning him into “anything unnatural” would be the same emotion shared by Malfoy in case he crosses paths with Moody ever again!